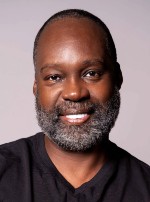 Like McGuire, the character played by Tom Cruise was a sports agent, and the fact that the last names are similar has not been lost on anyone.

“The movie portrayed the life of a sports agent accurately in many respects,” he says. “We are all infatuated with the idea of sports agents and what they do.”

And even though the movie is two years old, “I don’t think comments [to me] from that movie will die down anytime soon,” says McGuire.

In fact, at his company, CSMG Sports Ltd., McGuire is billed as Kennard “Making His Clients Money” McGuire, a takeoff on the movie’s oft-quoted line, “Show me the money.”

CSMG is one of the nation’s top full-service sports management and marketing firms. As a principal and senior vice president, McGuire has more than 80 professional football and baseball clients under his wing, including Wade Boggs of the Tampa Bay Devil Rays, Ashley Ambrose of the Cincinnati Bengals, Bobby Taylor of the Philadelphia Eagles, Randy Johnson of the Seattle Mariners, and UT’s own Charlie Garner, also of the Eagles.

Unlike the fictitious Maguire, the agent who learns ethics the hard way by losing his job and rebuilding his life from the bottom up, McGuire has made loyalty, integrity, and honesty top priorities in his career from the beginning.

“We pride ourselves on educating our players,” he says. “We make it our primary responsibility to teach our clients their financial options from the minute the ink dries on their contracts.”

He not only “inks” the deal, but he and his partners show their clients how to make, manage, and invest their money.

As an ex-professional football player who ended early his career with the New England Patriots after a knee injury, McGuire knows by experience how short-lived sports careers can be.

He credits UT football coach and legend Johnny Majors for the ability to rebound from that disappointment into a lucrative career as a sports agent.

“He always said, ‘Go all out all the time, and don’t let circumstances get you down,'”

McGuire says. “I thank Johnny because he really instilled a work ethic in me and taught me about competing. I really bought into that.”

When McGuire was offered a job as an agent at Illinois-based CSMG, he jumped at the chance. Is he ever envious of the guys on the field?

“NO,” he says, emphatically. “Never. It’s worked out great for me. I’ve been very blessed.”

Recently, McGuire had a chance to see just how blessed he is. He and pro football stars Ambrose and Taylor decided to change jobs for a day.

“We actually switched for a day,” he says. “I worked out and played video games, and my office inundated them with the things I had to do.”

McGuire says the experience gave the players a renewed vision of what the agency does for them and a look at the real world.

“It was also good because I preach entrepreneurship. It’s important to take advantage of opportunities while they’re playing, because when those glory days are gone, they are, in fact, gone.”

McGuire practices what he preaches. With a degree in business and communications from UT, he was well prepared for life after pro football.

“When we represent someone, the first year is always a fight,” he says. “These kids get out of college, and all of a sudden, they have the financial means to do what they’ve always wanted to do. The first thing they want to do is get that car and nice apartment. They forget they’ve got all these loans due.”

“I’ve been through it all,” he says, including dealing with a player who didn’t want to go through with a wedding.

“I had another client whose wife went into labor before the anticipated date,” he says. “Unfortunately, I was the only one available [to help her].

“I got her to the hospital. They put her in a wheelchair and wheeled her in. In all the excitement, they must have thought I was the father, so they wheeled me in, too.”

As she was giving birth, McGuire passed out.

“All I know is, when I came to, they were proud parents.”

Now word around CSMG is, “if your wife goes into labor, don’t call Kennard,” he says, laughing.

As with any career, life as a sports agent has its ups and downs. McGuire travels anywhere from 40,000 to 50,000 miles a year. He’s been through a baseball strike and gets phone calls in the middle of the night from troubled clients.

“And like Jerry Maguire, my job has affected my personal life. I was one who ended up divorced because of my work,” he says. “I could really relate to the movie in that respect.”

“A young player’s mother had a heart attack. He was in one city. She was in another one. The father and brother were truck drivers, so they were on the road. I sat with her as my sister made arrangements to get the player to the hospital.”

The player’s mother died just before he got to her, McGuire says, his voice wavering slightly. “I sat with them until they were all OK.”

McGuire made all the funeral arrangements for the grieving family. And though times like those are hard, he wouldn’t trade them for the world, he says.